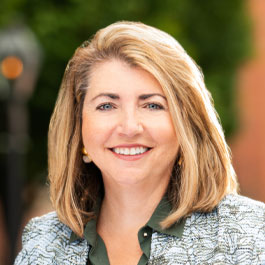 Lisa M. Barton is executive vice president and chief operating officer of American Electric Power. She leads the activities of all AEP utility operating companies, as well as the operations of the Generation and Transmission business units, and the Procurement, Supply Chain and Fleet Operations organization.

Previously she was executive vice president, Utilities overseeing the activities of all AEP utility operating companies. Before that, she served as executive vice president, AEP Transmission, from 2011 through 2018. During her tenure, she established AEP Transmission Holding Company and its affiliates, oversaw transmission operations, and grew and managed an $18 billion asset base for the largest owner, operator and developer of electric transmission in North America.

Barton is a member of the company’s senior executive team and is an active participant in national forums on the subject of energy policy. She testified before the U.S. Senate, state commissions and served as a contributing member of the MIT Energy Initiative "Future of the Electric Grid"; and the bipartisan committee initiative on "Delivering Electric System Reliability and Clean Technology."

She joined AEP in 2006 from Northeast Utilities. Before that, she worked with Strategic Energy LLC, in Pittsburgh, and Ransmeier & Spellman of Concord, N.H.

Barton earned a bachelor’s degree in electrical engineering from WPI in Worcester, Mass., and a juris doctorate degree from Suffolk University Law School in Boston. She completed the Harvard Mediation Program for the Instruction of Lawyers, the Executive Program-Darden School of Business at the University of Virginia and the Nuclear Reactor Technology Program at the Massachusetts Institute of Technology.

A former International Women’s Foundation Fellow and member of G100 Next Generation Leadership, Barton is a current member of C200. She serves on the boards of the Electric Power Research Institute, Commercial Metals Company and GridWise Alliance, and she is a former board member of ReliabilityFirst. Barton also chairs the board of the Columbus Symphony Orchestra and is a board member of the Wexner Center for the Arts.