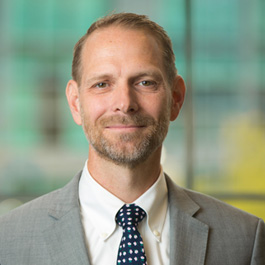 Previously, he was president of AEP Energy Partners. In this role, he was responsible for building the competitive wholesale, retail, onsite solutions and universal scale renewables businesses for AEP. In 2006, his team started AEP Energy Partners which manages the competitive wholesale marketing and trading business which focuses on bespoke commodity solutions for wholesale customers. In 2010, his team started AEP Energy, the competitive retail business serving residential, commercial and industrial loads in deregulated states. In 2014, the team started AEP Onsite Partners focusing on building asset solutions such as solar, energy storage, fuel cells, reciprocating engines, substations and other technologies on or near customer sites. Lastly, in 2015 the team initiated its universal scale renewables business focused primarily on development, ownership and operation of large-scale wind and solar plants throughout the United States.

Prior to that, he held positions of increasing responsibility with the Commercial Operations group. From November 2002 to September 2006, he was vice president - energy marketing. From January 2000 through November 2002, he was promoted from originator to manager to director of energy marketing. Previous to this work, he was the first energy associate with AEP Energy Services, from 1998 to 2000. He began his career at AEP as a research associate, AEP Service Corporation in 1997.

He currently serves on the board of the American Clean Power Association, the national clean energy industry group and Flying Horse Farms, a camp focused on providing holistic healing for children with major medical issues and their families.