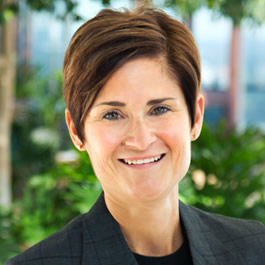 Julie Sloat is president and chief executive officer of American Electric Power. She is AEP's 11th president and seventh CEO in the company’s more than 100-year history.

She most recently served as president and chief financial officer of AEP from August to December 2022. She was named executive vice president and chief financial officer effective January 2021 and was responsible for accounting and tax, treasury and risk, corporate planning and budgeting, and investor relations. Previously Sloat served as senior vice president, Treasury and Risk. She led all elements of the treasury function including the cultivation of banker, investor and rating agency relationships to support the capital market needs of the company; cash flow management and forecasting; development of capitalization strategy and monitoring of key credit metrics; and the management of AEP's trusts and investments function which includes establishing funding strategies and performance monitoring of Pension, OPEB, and other obligations. She was also responsible for the comprehensive management of the corporation's risk including operational, market, credit, insurance, enterprise risk management, and business continuity.

In addition to her AEP career, Sloat was vice president of Corporate Finance and Investor Relations at Tween Brands, Inc., in 2008 and 2009. She was employed by Bank One (JP Morgan) from 1995 to 1999, serving as a bank debt underwriter and buy side equity analyst covering the electric utility sector. She worked for M&T Mortgage Corp, a subsidiary of M&T Bank Corp., from 1993 to 1995.

Sloat earned a bachelor of science in Business Administration with a double major in Finance and Economics from the Ohio State University. In 1999, she received a Master of Business Administration degree from Ohio State and was the recipient of the Faculty Recognition Academic Excellence Award and the Weidler Scholar Award. She also completed level one of the Chartered Financial Analyst exam series. Sloat completed the Nuclear Reactor Technology Program at the Massachusetts Institute of Technology (MIT) in June 2019.

Sloat is an avid long distance runner (multiple year Boston qualifier/finisher) and cyclist. She loves the Buckeyes and resides in Columbus.