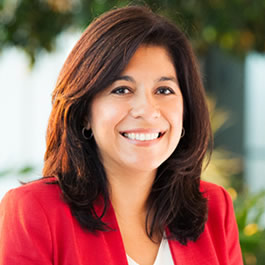 Judith E. Talavera is president and chief operating officer for AEP Texas, responsible for the company's operations in south and west Texas. At AEP Texas, we're improving our customers' experience, strengthening communities and energizing our employees to create a brighter future together.

Previously, she was director of Regulatory Services for AEP Texas since November 2008. Talavera began her career with AEP in 2000 as manager of Governmental Affairs for AEP Texas.

Before joining AEP, Talavera worked in a number of legislative positions for former Texas State Sen. Mario Gallegos Jr., including serving as his legislative director.

Talavera has bachelor's degree in journalism from the University of Texas at Austin and has completed the AEP/Ohio State University Leadership Program and Leadership Texas.

Community service and involvement has been a vital part of Talavera's career. She currently serves as a board member on the Senate Hispanic Research Council, Corpus Christi Regional Economic Development Corporation, United Way of the Coastal Bend, and Texas State Aquarium.

Talavera and her husband, Ric, have two sons and live in Corpus Christi, Texas.